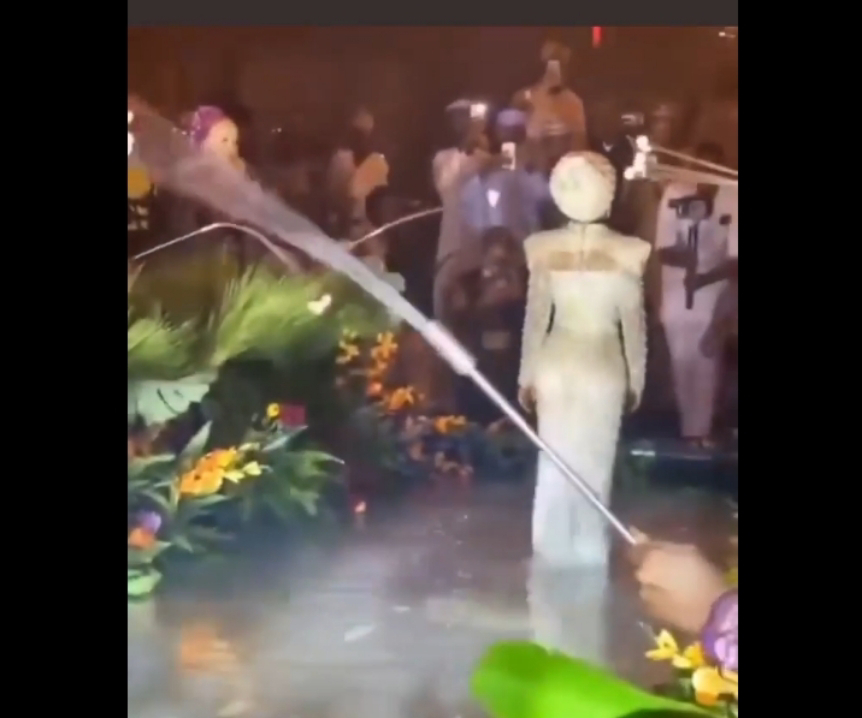 She waded through water as she made her way to her groom, just as the protagonist did in the movie Crazy Rich Asians.
Biography of Crazy Rich Asians, according to Wikipedia:
“Crazy Rich Asians is a 2018 American romantic comedy-drama film directed by Jon M. Chu, from a screenplay by Peter Chiarelli and Adele Lim, based on the 2013 novel of the same title by Kevin Kwan. The film stars Constance Wu, Henry Golding, Gemma Chan, Lisa Lu, Awkwafina, Ken Jeong, and Michelle Yeoh. It follows a Chinese-American professor who travels to meet her boyfriend’s family and is surprised to discover they are among the richest in Singapore.
“Crazy Rich Asians premiered on August 7, 2018, at the TCL Chinese Theatre in Los Angeles and was released theatrically in the United States on August 15, 2018, by Warner Bros. Pictures. A major critical and commercial success, the film grossed over $238 million on a budget of $30 million, making it the highest-grossing romantic comedy of the 2010s, and received high praise for the performances of its cast (especially of Wu and Yeoh), the screenplay, and production design. The film received numerous accolades, including the 76th Golden Globe Awards nominations for Best Motion Picture – Musical or Comedy and Best Actress – Motion Picture Comedy or Musical for Wu. It received a nomination at the 50th NAACP Image Awards for Outstanding Motion Picture. It also received four nominations at the 24th Critics’ Choice Awards, winning one for Best Comedy, and a Screen Actors Guild Award for Outstanding Performance by a Cast in a Motion Picture at the 25th Screen Actors Guild Awards. Two sequels, based on the novel’s follow-ups China Rich Girlfriend and Rich People Problems, were for a while in development, but now on prolonged hiatus.”
Video below: