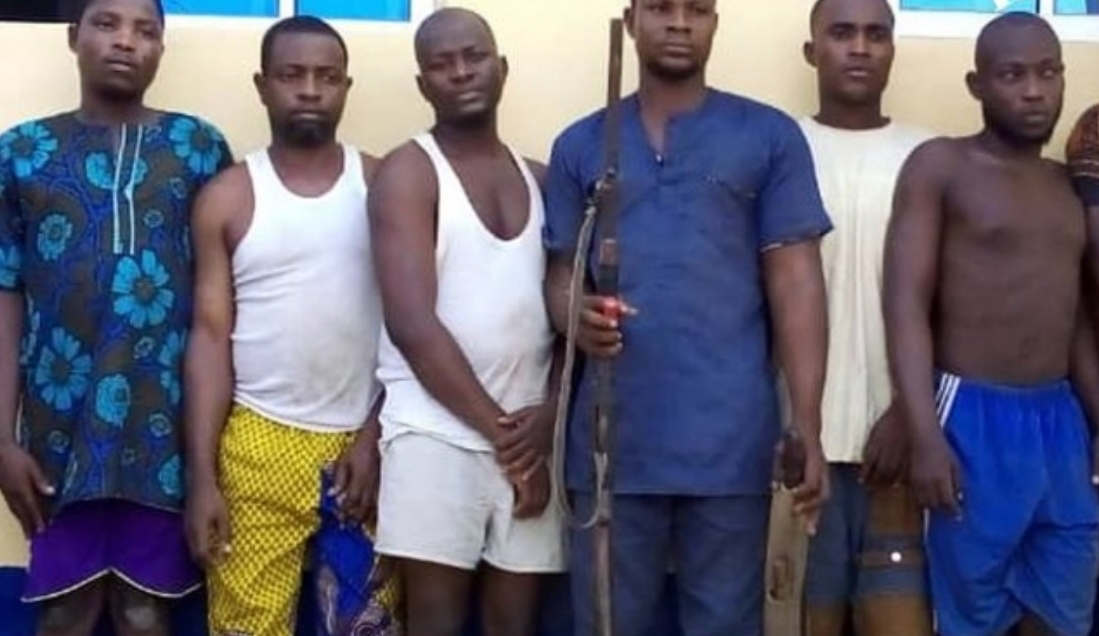 The all male suspects have been identified as Lekan Oladipupo, 38, Sulaiman Aremu, 30, Ifayemi Madru, 24, Shittu Saheed, 38, Samod Sulaiman, 35, Akanji Moruf, 23, and 36-year-old Tajudeen Adekunle.
According to the command’s spokesperson, DSP Abimbola Oyeyemi, the suspects were arrested following a report lodged at Bode Olude divisional headquarters by one Abraham Okosun, who reported that he visited his brother, Sunday Okosun, at Agbara village via Mawuko Abeokuta, only to discover that his brother had been brutally murdered by unknown person(s), and his remains had been dismrmbered.
Upon the report, detectives traced and apprehended Lekan Oladipupo, who on interrogation confessed being the actual person who shot and killed the deceased with his Dane gun. His confession led to the arrest of the other six suspects.
On interrogation, each of the suspects narrated their respective roles in the gruesome murder of the deceased and others who have been killed in similar circumstances.
Lekan Oladipupo informed the police that his own role is to look for their victim, usually in the bush around mawuko area, and shoot them to death. He will then contact Sulaiman Aremu, who will b*tcher the corpse of the victim and remove vital parts to be distributed to their standby customers.
The suspects confessed to having killed not less than four persons in similar circumstances and that their bodies parts were used for money-making ritual.
They also informed the police that they have code names for each human part whenever they want to request for it from their butcher man. For example, they normally referred to human head as ball, the heart as transformer, while the hands are codenamed as fans.
http://feeds.feedburner.com/kossyderrickent/rss